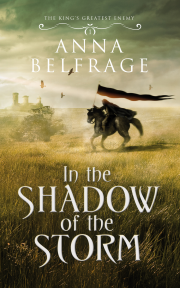 Title: In the Shadow of the Storm (The King’s Greatest Enemy I)
Author:  Anna Belfrage

A tidbit about the author
She always planned to be a writer “in between being an Arctic explorer, a crusader, or the Lionheart’s favourite page (no double entendre intended).” I don’t know when this prolific writer sleeps. She published the 8th book in the award-winning The Graham Saga a few months back. She recently took a break from her CFO day job. She is a mother of 4 and a wife who loves to bake, and “imagination is something [she has] in spades.”

The story
“Adam de Guirande owes his lord, Sir Roger Mortimer, much more than loyalty. He owes Sir Roger for his life and all his worldly goods, he owes him for his beautiful wife…  So when Sir Roger rises in rebellion against the king, Adam has no choice but to ride with him – no matter what the ultimate cost may be… The Welsh Marches explode into war, and soon Sir Roger and his men are fighting for their very lives. When hope splutters and dies, when death seems inevitable, it falls to Kit to save her man – if she can.”

The scene that made you smile or cheer

I felt sorry for Kit, but it is Ms. Belfrage’s description of the scene that made me smile. There is also a scene a bit later with mention of naked ducks, prowling foxes, and a henhouse. “It is my hen.” Well done, Ms. Belfrage. 🙂

The place where you wanted to throw the book across the room
Oh my, Ms. Belfrage. What have you done?! Kit . . . Despenser.  And Guy. Horrible, horrible. (Sorry, dear readers. I can’t provide any details because of spoilers.)

A memorable line (or several)

My verdict – 4.5*****
Anna Belfrage has a way to transport a reader into another time and place, into the people of her story. When I opened the pages of In the Shadow of the Storm, 2015 was left behind. The sights, smells, and sounds of the early 14th century became home, though it is not necessarily warm or safe.

Forced  to assume the identity of the half-sister she did not know about, Kit becomes the wife of the unsuspecting Adam de Guirande in an arranged marriage that neither wants. The two fictional protagonists fall in love though Belfrage throws doubts and obstacles in their path every step of the way. Their relationship and Adam’s allegiance to Mortimer, enemy of Edward II and Hugh Despenser, leads to tension, heartache, edge-of-the-seat action, and drama. This kept me turning the pages, even when I wanted to slap Adam for being Adam. He can’t help being a 14th century man. But I know enough of medieval times to recognize that Ms. Belfrage gets it right: she gives us a very realistic picture of society, customs, and culture wrapped inside an excellent story. Kit recognizes her place as a 14th century wife, but she is a strong and independent woman. I found myself rooting for Kit and Adam throughout the book. (Did I mention the steamy sex scenes? Quite lovely.) And the antagonists? Oh dear… every time one steps on scene, I cringed.

Enter Kit’s life. Her fear is our fear. Her joy is our joy. I highly recommend this book. It is a wonderful read. I look forward to Book II in the series.

Disclaimer: I was given an ARC (advance review copy) in exchange for an honest review.

5 thoughts on “Talking about the book: In the Shadow of the Storm by Anna Belfrage” 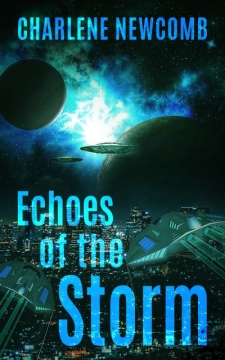