Battle Scars: Men of the Cross traces the lives of two knights during the Third Crusade. It’s about relationships, bonds of friendship, loyalty, politics, and intrigue. It’s about war, of course. And war is dark and brutal. But readers don’t want to trudge through one horrific event after another. Readers need some downtime, some lighter moments. Last week, my writers group heard the post I plan to share tomorrow. You may thank them for suggesting I remind you that MotC will have its ups and downs, and that I should prove that with a short snippet that will let you smile. 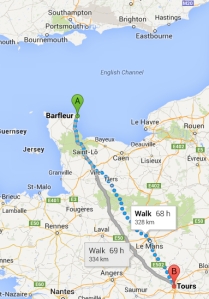 My two main characters, knights Henry & Stephan, meet in Southampton in March 1190. They sail to Barfleur, and with hundreds of other pilgrims, journey to Tours¹ (in what is now France) where King Richard’s army is gathering. They’ve settled in their tents, unpacked their belongings…

Stephan swiped a hand across his brow. “Robin is anxious to meet you. He’s invited us to sup with him.”

Henry chuckled. “Does the man know you’ve placed him on a pedestal?”

“Have I?” Stephan frowned. Henry was right. He’d mentioned Robin’s name nearly every time he spoke of the campaigns from Normandy to Aquitaine. Robin had been serving Richard near nine years and been knighted, given lands in Chinon. “Don’t tell him. His ego is as high as the clouds as it is.”

A grin tugged the corners of Henry’s mouth. “That explains why the two of you get along so well. If yours were any higher it would touch the stars.”

Stephan pointed to himself. “Me?”

Have a great Monday! And check back tomorrow!

¹ Tours is about 200 miles from Barfleur. I suggest it was a 10-14 day journey – the knights are with a caravan of wagons and carts, so even 20 miles a day would have been quite a trek.