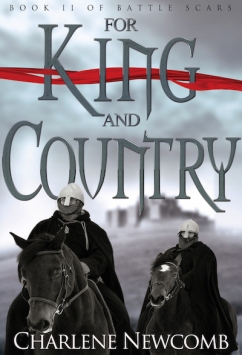 Comment on the Giveaway post on English Historical Fiction Authors blog for a chance to win a Kindle or epub version of my upcoming release For King and Country. The giveaway will be open April 18 – 24.

Double your chances by commenting on my earlier announcement!

England 1193
Civil war threatens as battle-scarred knight Henry de Grey returns from the Crusades. King Richard languishes in captivity, a prisoner of the Holy Roman Emperor. Traitors to the crown pit Henry and his friends against dangerous and unknown enemies.

Loyalties will be tested, families torn apart. Friend or foe? It is hard to tell one from the other.

The king’s brother John and his allies plot to usurp Richard’s throne. With the knights Sir Stephan and Sir Robin, Henry fights for king and country. But he must keep his feelings for Sir Stephan l’Aigle secret. Sure as arrow or sword, their forbidden love could destroy him.

War, political intrigue and passion…
heroes… friends and lovers…
and the seeds for a new Robin Hood legend await you…