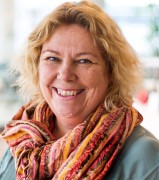 I am delighted to have Anna Belfrage on my blog today as part of the first indieBRAG Book Blitz. Anna’s eight time-slip novels in The Graham Saga are B.R.A.G. Medallion honorees. Book 6 in the series, Revenge & Retribution, was awarded the 2015 HNS Indie Award for the best indie-published historical fiction. I had the honor of meeting Anna at the Historical Novel Society Conference in Denver this past June. Join us today as Anna highlights Book 4 of the series: A Newfound Land.

A Lost People, A Lost Voice
by Anna Belfrage 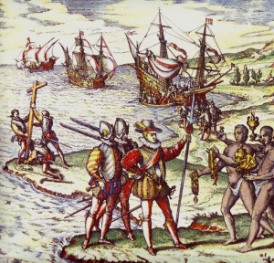 When I was a child growing up in South America, one of the more important festive days was the 12th of October, El Día de la Raza (Nowadays mostly known as Columbus Day – or the rather beautiful Día de la Hispanidad). This day celebrated the arrival of Columbus in the New World, and as is obvious just by that denominator, our European forebears seemed quite convinced that BEFORE them, there was nothing…

We know better, of course. Those intrepid conquistadores did not set foot on land untouched by man. The American continent was home to such impressive civilisations as that of the Incas and the Aztecs, held the ruins of the ancient culture of Tiahuanaco, was engraved with the Nazca circles. And in the northern half of the continent were all those tribes collectively named the Indians by the first European explorers – even after they’d cottoned on to the fact that America was, in fact, not India. (Columbus may have been a brave and visionary explorer, but he was crap at maths…)

It is estimated that North America was home to anywhere between 7 to 10 million people prior to the arrival of the Europeans in the early 17th century. A century later, the indigenous population had plummeted, down by as much as 80% in some regions. In some cases, entire tribes were wiped out as a consequence of European rapaciousness combined with all those lethal diseases the white man brought over, notably smallpox and measles. One such tribe was the Susquehannock.

If we’re going to be quite honest, we know almost nothing about the Susquehannock. In fact, today we have no idea what they may have called themselves, because there is no one around who speaks their language anymore. Once a language dies, the culture that flourished with it dies as well, and so we have no idea as to what beliefs, what myths the Susquehannock held dear. It’s almost as they never existed – well, apart from the odd artefacts that are presently displayed in one or other museum. 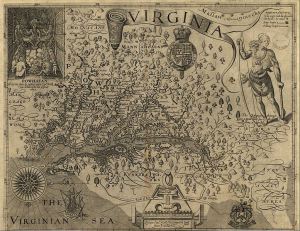 But the Susquehannock did exist, a power to be reckoned with, masters over a large swathe of land that stretched from Delaware, through parts of Pennsylvania and into Maryland. They were one of the people visited by John Smith as he went exploring along the Chesapeake Bay, and he found them impressive in size and strength. He also found them friendly, and for the first few decades of their co-existence, both the Susquehannock and the colonists prospered – a win-win situation for both.

The Susquehannock were mildly curious about the palefaces who landed on their shores, but did not find them particularly threatening – especially not in comparison with their fiercest enemies, the Iroquois. Compared to the fearsome warriors of this tribe, the white dudes came across as weak and puny. But they offered good trade, these palefaces, and the Susquehannock grew richer and more powerful, thanks to their cordial relationship with the bearded men who came from somewhere very far away.

No good things last forever, and xenophobic colonists had a tendency to lump all Native Americans together. So when the constant skirmishes between the Powhatan and the Virginia colonists escalated into open warfare in the 1670’s, the Susquehannock were dragged into the conflict – this due to unprovoked attacks by colonists on Susquehannock people. A decade later, the once so mighty Susquehannock had hit the dust. Their wooden forts had been razed to the ground, their men had been slain, their women enslaved, and what few remnants remained had fled due north-west, seeking the protection of their erstwhile enemies, the Iroquois.

Some Susquehannock made it over to Pennsylvania and founded a community there, Conestoga Town. There they eeked out a living far removed from their former life, hiring themselves as labourers to adjoining farms. In 1763, the last three dozen or so of true-blooded Susquehannock were massacred by the Paxton Boys, a militant group of white bad boys who killed whatever Indians they could get their hands on in retaliation for the recent French-Indian war. Less than two centuries after their first contact with the European settlers, the Susquehannock had ceased to exist. It was as if someone had used a giant eraser to rub them out. Completely.

In The Graham Saga, Matthew and Alex Graham are obliged by various events to flee their homeland and instead make a new life for themselves in Maryland. Their first encounters with this their new home are depicted in A Newfound Land, and it is also in this book that Matthew and Alex (plus my readers) first meet Qaachow, proud Susquehannock chief. Qaachow shares his name with one of the victims of the 1763 massacre (one of the few lists we have of Susquehannock names), and sometimes I worry that the little boy so brutally murdered in the 18th century is a great-great-grandson of my Qaachow. But my Qaachow is not a defenceless boy, he is a leader of men, a chief, a man who views the white settlers on lands that were once his with more curiosity than ill-will – at least initially.

Some sort of friendship springs up between Matthew and Qaachow, two men with similar perceptions of right and wrong, two men intent on protecting their families. But as the Susquehannock lose everything to the white man, Qaachow’s relationship with Matthew changes, developing from an uncomplicated, if cautious, friendship to something far more bitter – as is depicted over the last few books of The Graham Saga. Ultimately, Matthew and Alex will pay a very high price for Qaachow’s continued goodwill, but they have no choice, dependent as they are on his protection.

Qaachow is my homage to a people that no longer is, to a people who extended their hands in generous welcome to the palefaces that landed on their shores – a gesture they were to bitterly regret. As Qaachow says to Alex, “We should have listened to our wary brethren of the north and pushed you back into the sea.” In retrospect, of course they should. But then, most of us don’t know today what tomorrow’s consequences of our actions will be. That’s probably a good thing, I think. Just as it is a good thing if people do extend a helping hand to those that need it.

Sadly, I’m not sure the restless shades of the Susquehannock agree. The price they paid was way too high, and where once it was their voices that rang through the forests of Maryland and Delaware, now they are forever silenced. Forgotten, as if they had never existed at all. But they did exist. They lived and hoped, they loved and lost, leaving nothing behind but a whisper in the soughing wind, a sudden burst of sunlight in a silent glade.

About the Graham Saga
This is the story of two people who should never have met – not when she was born three centuries after him. But sometimes impossible things happen, and so Alex Lind ends up at the feet of Matthew Graham. Life will never be the same for Alex – or for Matthew.

Anna has been visiting numerous blogs this week. Don’t miss any of her stops! And visit indieBrag for a Book Giveaway.

Had Anna been allowed to choose, she’d have become a professional time-traveller. As such a profession does as yet not exists, she settled for second best and became a financial professional with two absorbing interests, namely history and writing. These days, Anna combines an exciting day-job with a large family and her writing endeavours.

When Anna fell in love with her future husband, she got Scotland as an extra, not because her husband is Scottish or has a predilection for kilts, but because his family fled Scotland due to religious persecution in the 17th century – and were related to the Stuarts. For a history buff like Anna, these little details made Future Husband all the more desirable, and sparked a permanent interest in the Scottish Covenanters, which is how Matthew Graham, protagonist of the acclaimed The Graham Saga, began to take shape.

Set in 17th century Scotland and Virginia/Maryland, the series tells the story of Matthew and Alex, two people who should never have met – not when she was born three hundred years after him. With this heady blend of romance, adventure, high drama and historical accuracy, Anna hopes to entertain and captivate, and is more than thrilled when readers tell her just how much they love her books and her characters.

Presently, Anna is hard at work with her next project, a series set in the 1320s featuring Adam de Guirande, his wife Kit, and their adventures and misfortunes in connection with Roger Mortimer’s rise to power. The King’s Greatest Enemy is a series where passion and drama play out against a complex political situation, where today’s traitor may be tomorrow’s hero, and the Wheel of Life never stops rolling. The first instalment in the Adam and Kit story, In the Shadow of the Storm, will be published in the autumn of 2015.

2 thoughts on “A Lost People, A Lost Voice – A Guest Post by Anna Belfrage” 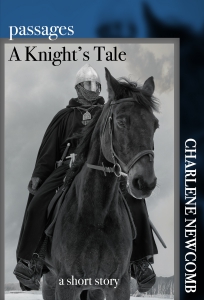